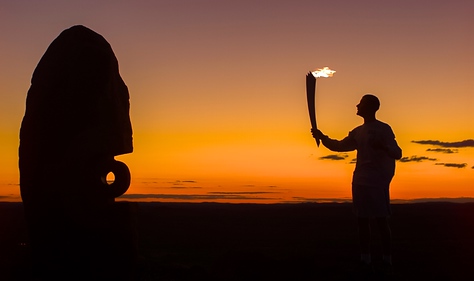 Another favourite visual moment of the relay for me. This one is at Broken Hill in NSW. It was all in the timing again so that we arrived at the spot a few minutes past sunset. I had two options for this – use flash and try and show the torchbearers (Nathan Harrington)  face, or go for a more dramatic silhouette. I shot both ways. We were there for exactly 2 minutes and 50 seconds and I shot 18 frames before running off to more relaying.

Beside the never ending search for the perfect torchbearer photo the other target I had was the crowd watching the torchbearers. Right from the start of the relay in Guam I was always on the lookout for interesting crowd photos. Unfortunately, newspapers aren’t so interested in these shots so the focus has to always be on getting a great torchbearer shot first, and if the crowd can be included in that same from all the better. So it became a side project of mine, capturing the amazing faces on the sides of the roads.

Often it was the kids faces that were the most expressive. But sometimes it was the older generation. One of my favourite character faces is this shot of an old lady in Broken Hill, NSW.

I was waiting on the side of the road for the torchbearer to run up the hill to get this shot:

when I noticed this lady standing at her front gate. I’m not sure which image I prefer from that moment…