Fiji was supposed to be our day 14 stop – but recent political unrest had them scratched from the itinerary.

As mentioned earlier, the Flame can be carried onboard aircraft thanks to them being housed in a safety lantern. Here is shot of them onboard the ‘flame plane’ as we flew between Tonga and the Cook Islands. They are resting in a specially designed seat holder, allowing them to be strapped in for each flight – just like any first class passenger! 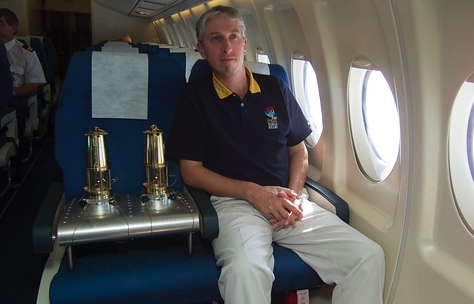 Sitting beside them is Flame Security boss Chris Reeves (also a policeman in normal life). It wasn’t essential for him to sit next to them all flight – but this was a special photo I shot for the newspapers – so it is looking very official!

You’ll notice Chris in more than a few of my photos. His role as the guardian of the flame meant he was never more than a few feet away – and so often ended up in my photos. Some complained he was becoming the unofficial ‘face of the Torch Relay’. But it is hard to keep out of the shot while also having to keep control of the whole Flame transfer situation. Chris did his best to stay out of shot, usually with one eye on me to make sure I was getting a good clean shot before he had to step in again (but I’m sure he also loved the attention none the less).